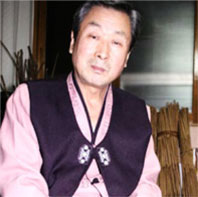 Gungsijang is a master artisan who makes arrows and bows. A master artisan who made a bow was called Gungjang and that of who made an arrow was called Sijang. The master Ho-jun Park is especially a Sijang who makes an arrow.
A bow has been used from the prehistoric era even after the appearance of gunpowder weapons. In Korea, heads of the Mesolithic Age were excavated among microlith and it is assumed that a bow was used widely as a hunting tool in the primitive ages. According to the literature and excavated relics available today, the history of Gungsi, an arrow and bow, in Korea can be traced back to the prehistoric era, and the type of arrows and bows that had been used since that time is quite diversified.
Mainly, the types of arrow are Mokjeon, Cheoljeon, Yejeon, Pyeonjeon, and Yuyeobjeon, depending on weight and purpose. As for the major materials used for production, Korean lespedeza, bamboo, steel, sinew, birds’ feathers, peach peel, and glue were used.